I did this when Monza and Spa were scheduled back to back in 2007 but GUESS WHAT(!), they're back-to-back again for the 2016-1017 season based on the approved Motor Sports Council schedule.

I’m not going to describe the races because you already know about those. I'm just passing on my experience in attending both races.

My wife was bugging me for a European vacation but, at least, she let me do the planning. With Monza and Spa back-to-back, I picked our dates to cover those races. Now we just couldn’t go to Monza and Spa. Since this was a “vacation” I had to throw in a couple of extra cities for her benefit and I couldn’t attend all three days for each race (that would have taken up too much “vacation” time). In the interest of domestic tranquility, I could only attend race day.

First I had to get race tickets. Monza looked pretty simple. Logged on to their website and looked at tickets. Almost everything was sold out since I only started planning in July. Also, only 3 day tickets are available no single dates. I decided to bite the bullet and buy a 3 day ticket with the intention of blowing off Friday and Saturday. I settled on grandstand 23 - the Inner Parabolica $295. Monza sent the tickets and they came pretty fast - by DHL. The Friday ticket is good for any grandstand. The Saturday and Sunday tickets are good only for the grandstand they were sold for. By the time the tickets arrived, I got the brilliant idea to sell off the Friday and Saturday portions. I went to a British ticket-selling site (the StubHub of England) and sold those very quickly - maybe someone’s wife told him he could attend Friday and Saturday but not Sunday. They credited my Paypal account in British pounds which Paypal converted to US dollars painlessly (the Brits offered to pay by check but I already had experience with my bank cashing checks in foreign denominations - you can’t do it without exorbitant fees even if the bank claims to have “world class service”). 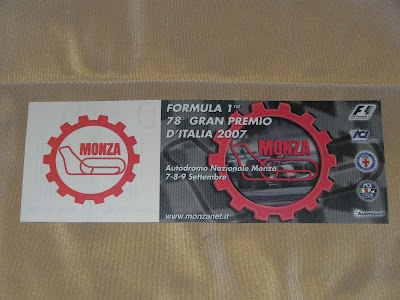 Spa was a different matter. The good news: you can buy Sunday only tickets. The bad news: I had to call them twice to get them to ship the ticket. Even after they claimed to ship, I had to call again because they still didn’t ship it. It arrived by FedEx 4 days before I left. They also charged me $35 for the privilege. I note that the ticket information is filled in by hand! I don’t know how many people work in their ticket office but their hands must be pretty tired from filling in seat info on tickets. My ticket was for grandstand 8 - La Source. This ticket is astronomically expensive - $535 after all fees were added. The Sunday only cost close to double all three days at Monza. 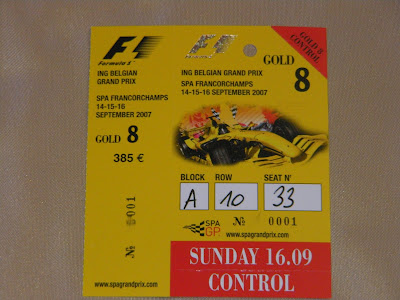 Monza. We stayed in Milan which is about 10 miles from Monza. Hotel rates in Milan were double for the weekend which, I thought, was because of the race. However, there is no indication in Milan that there is a Grand Prix going on. Milan does have a 4 story Ferrari store where you can buy stuff (no cars for sale though). The store had a “back to school” sale going on! I’m baffled; parents actually go to a Ferrari Store for back to school specials? People working in the store knew there was a race but were clueless as to other details (like how to get to the track). 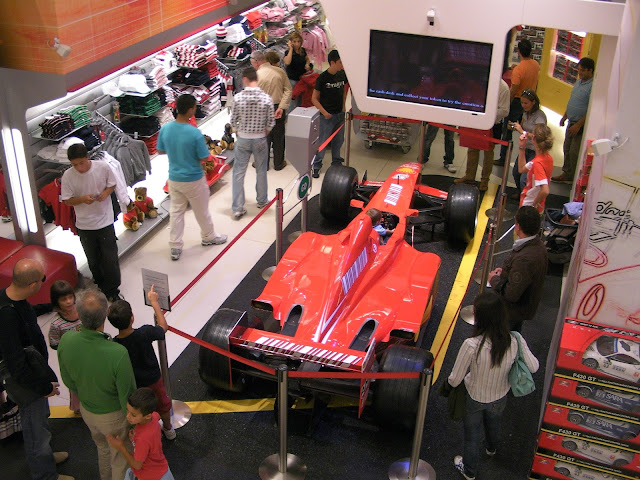 Inside the Ferrari store - Milan

Race day I went to the central train station and took a free train to Monza. I just followed F1 fans to the right train track - they were obvious. 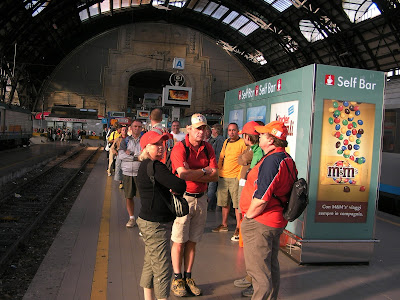 Waiting with fans for the train to Monza

The ride is about 30 minutes but the train does not stop in Monza. The train stops at Biassono/Lesmo which is at the north end of the track. I ended up walking to the south end, where my ticket was located. That took about 45 minutes. There were scalpers buying and selling tickets along the way. I can say that, without a doubt, DO NOT get Inner Lesmo (grandstand 23) tickets. The cars come from behind you and rocket past the pit entrance down the start-finish straight. You can see a fair amount of track (you can’t see the pits) but it’s like watching bullets leaving the barrel of a gun. You can get almost the same view by buying general admission tickets and sitting on the inner side of the Curva Parabolica. There are even some concrete seats there to sit on. 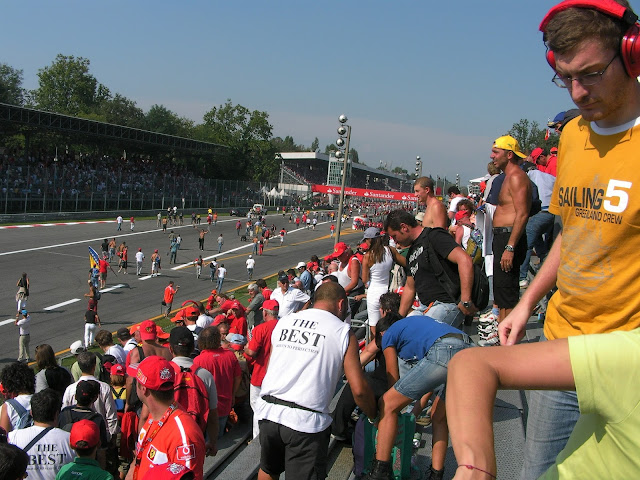 Security was not ironclad. I went into the VIP area behind the paddock by using an unattended exit and wandered around.  The souvenir stands were not as crowded but there were extra layers of security inside that kept you from wandering around aimlessly. Some people in my grandstand were sitting in the stairways.  My guess is that they didn’t have an actual ticket for the grandstand – they were just poaching. There were people checking tickets but during the chaotic periods you can just glide past. After the race, there were buses located at the south end of the track to take you back to Monza - where you can get back on a free train. I religiously followed the signs to the buses but never did find them - just kept going around in circles. Eventually, I ended up walking to the Monza train station. That took a good hour - about as fast as taking a bus judging from traffic. The train ride back was uneventful.

Spa. When I bought my Spa ticket, Belgian rail had a promotion giving you a free train ticket. When my ticket package arrived, there was no train ticket, coupon, flyer, nothing. We were staying in Brussels, so I went to the train station and asked about the formula one promotion. The only thing they knew about was a $15 round trip train-bus-tram ticket to the track - I bought one. Again, while in Brussels there is no indication that there is a grand prix going on although they were having some kind of festival involving beer, wine, food, music and strange costumes that was nice. 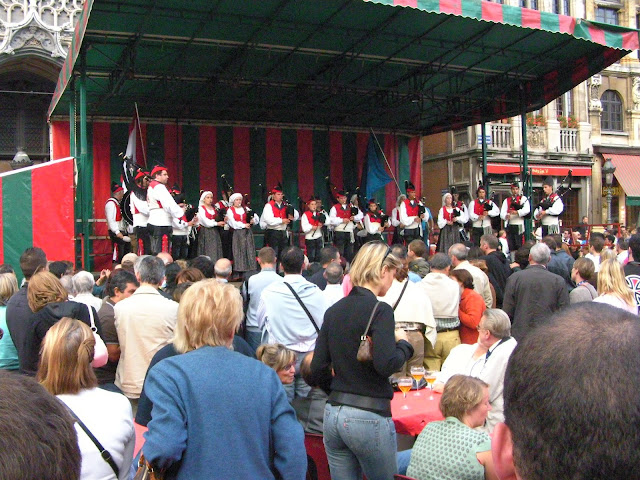 Race day I arrived at Brussels Nord rail station at 5:30am. I couldn’t tell from the train schedule which train to take but from my research I knew I had to get to the town of Verviers (the closest big town to Spa and Francorchamps). There was a direct Brussels-Verviers train leaving at 6:03am. Eventually other F1 fans showed up and they all congregated at the 6:03 train platform.

The train ride is 1.5 hours to Verviers. In Verviers, there were people guiding you to motor coaches that would take you to the track. You got on a bus based on your type of race ticket. The bus waited an hour to become 100% full before it left. The bus took the back roads to the track (about 45 minutes) and dropped me off about 200 yards from the track entrance. 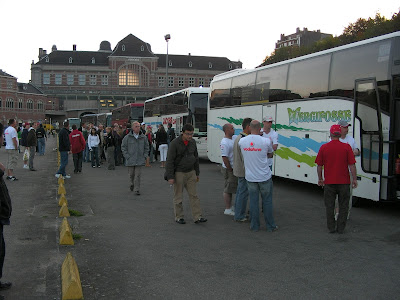 Buses to the track

By now it was almost 9:30am. After that, the bus went to the bus parking lot - more about this later. Security at the track was professional. I had to show my ticket three times at various checkpoints before I even got to the actual entrance. There were no scalpers buying or selling tickets. Once at the track, I headed over to F1 village. 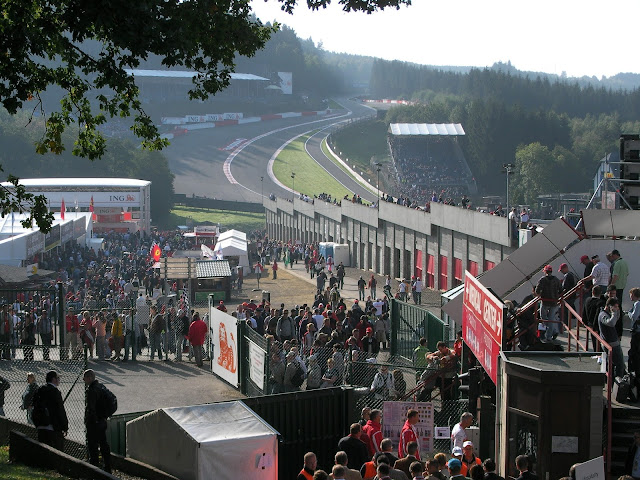 View of Eau Rouge from the F1 Village

I must say this is the best F1 village I’ve ever been to. Not that the F1 stuff being sold was any different but you could buy vast varieties of Belgian waffles, crepes, pancakes, draft or canned beer, wine, bratwurst, sandwiches, hot dogs, hamburgers, and get coffee in “brew your own cups”. 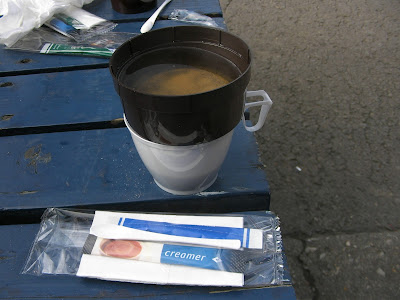 Brew your own coffee

Some of the food stands looked like little alpine chalets and the prices were reasonable by F1 standards. You can sit down at a nearby table and actually get an excellent view of the cars going up the hill thru Eau Rouge. My take is that you could buy a general admission ticket, go the F1 village, sit down and get a respectable view of the race from there. 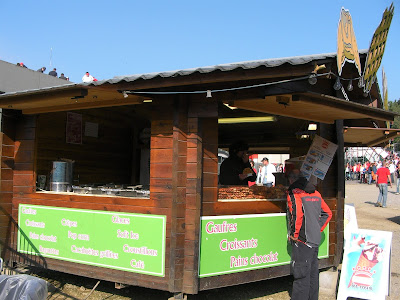 They had toilet facilities with attendants that cost $0.75 (but they were spotless) or you could just use a free port-a-potty. 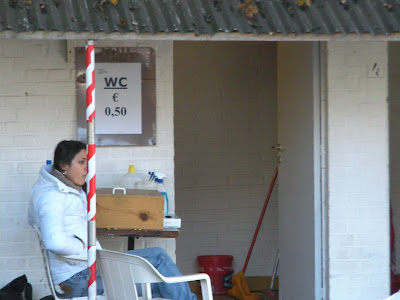 Pay toilet - it's worth it

On the other hand, if you’re buying tickets, I highly recommend grandstand 8 - La Source. It’s covered to protect you from rain and sun (don’t laugh it WAS sunny when I was there). It’s got a good view of the start-finish line and the pits. You can watch the cars from the start, though La Source and all the way up through Eau Rouge. To sit on, it has got actual seats with backs. My only complaint is the height of the safety fencing. You need a seat in row 25 or higher. Otherwise, you’re looking thru chain link fence at the track (like I was). 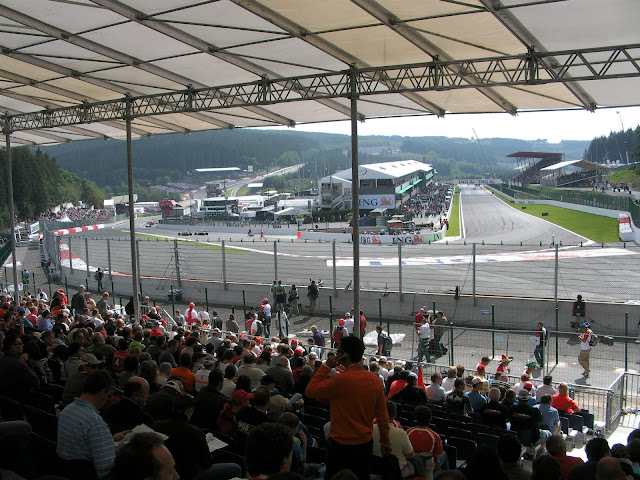 After the race, I went back to where the bus dropped me off but I couldn’t find it. I couldn’t find it in the bus parking lot either. I ended up walking a few hundred yards into the town of Francorchamps and taking a city-type bus (that was marked) back to Verviers. The bus was packed. I talked to some Brits on the bus who told me that, on Friday and Saturday, they had to take a tram from Verviers to Spa and then a bus to Francorchamps. Apparently there were no shuttle buses from Verviers like there were on Sunday.

Hope this helps if you ever have a chance to attend either of these races.

You can see my pics from those races: